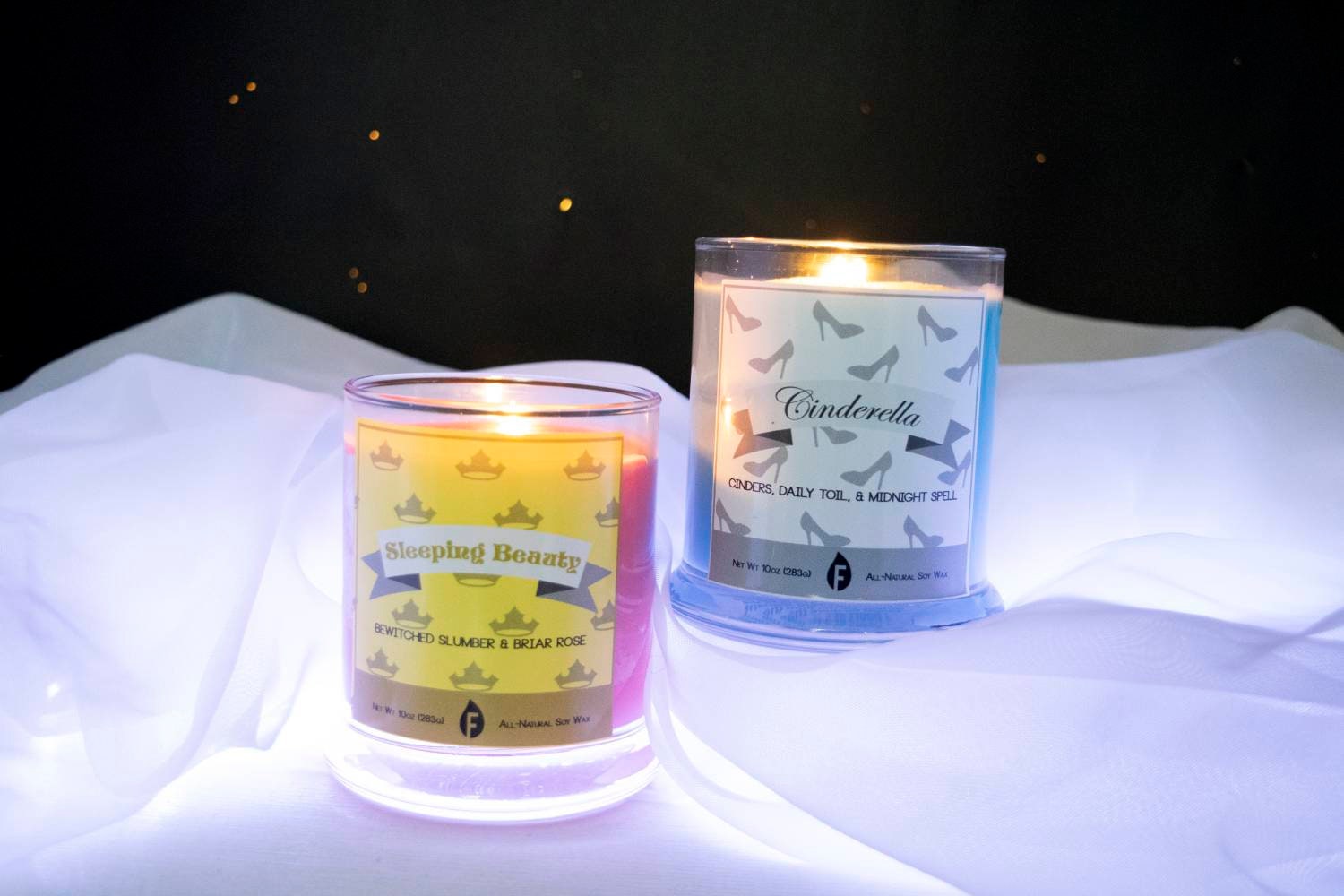 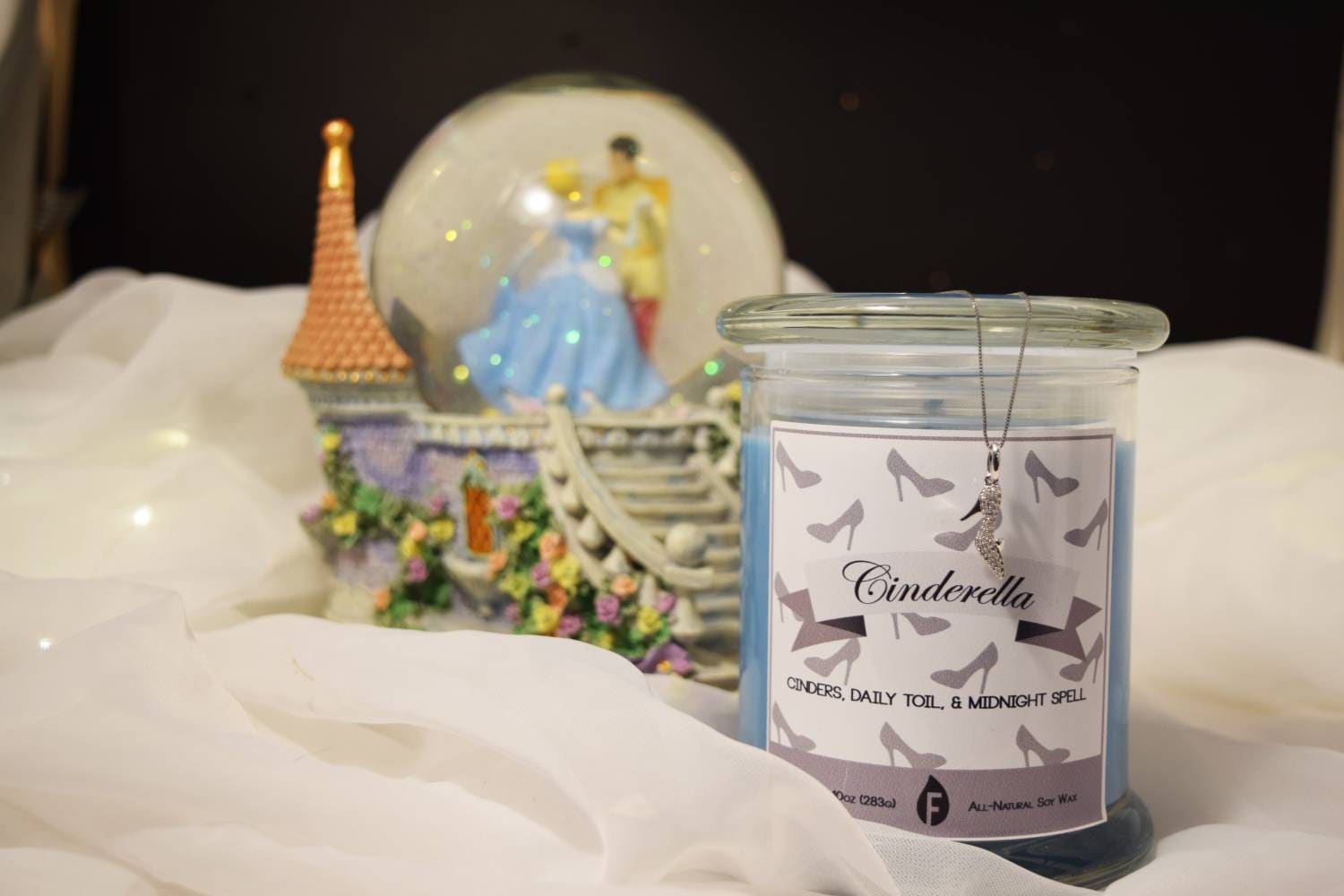 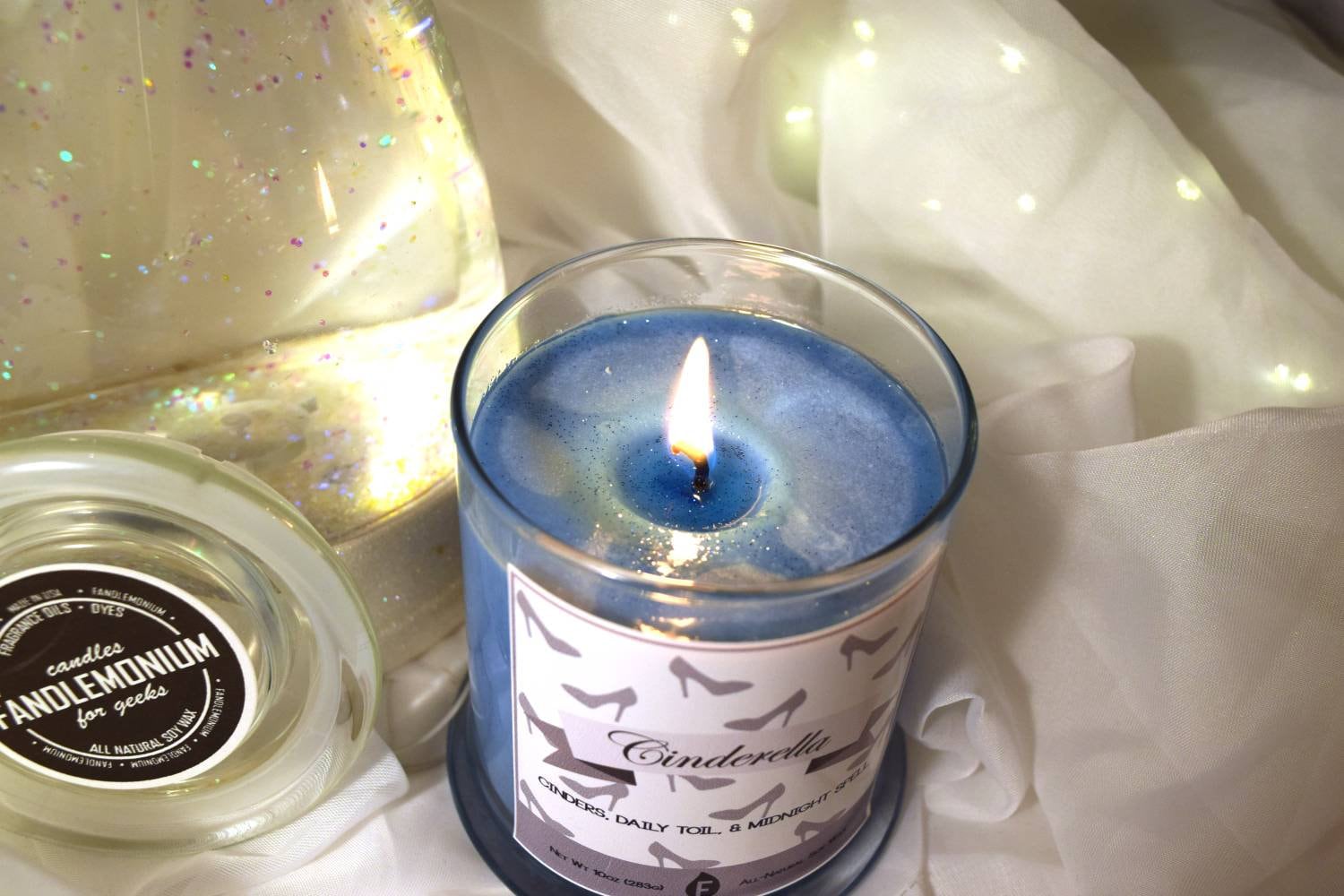 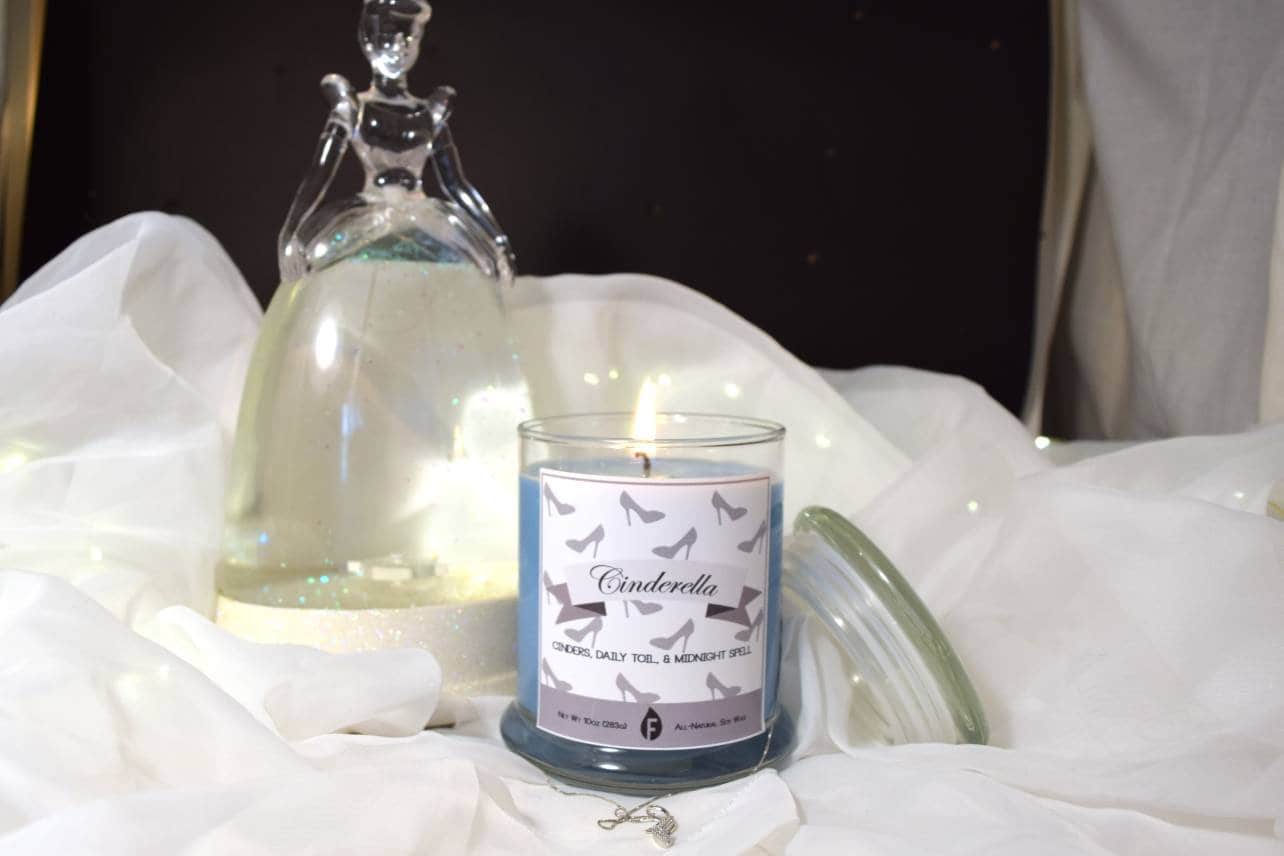 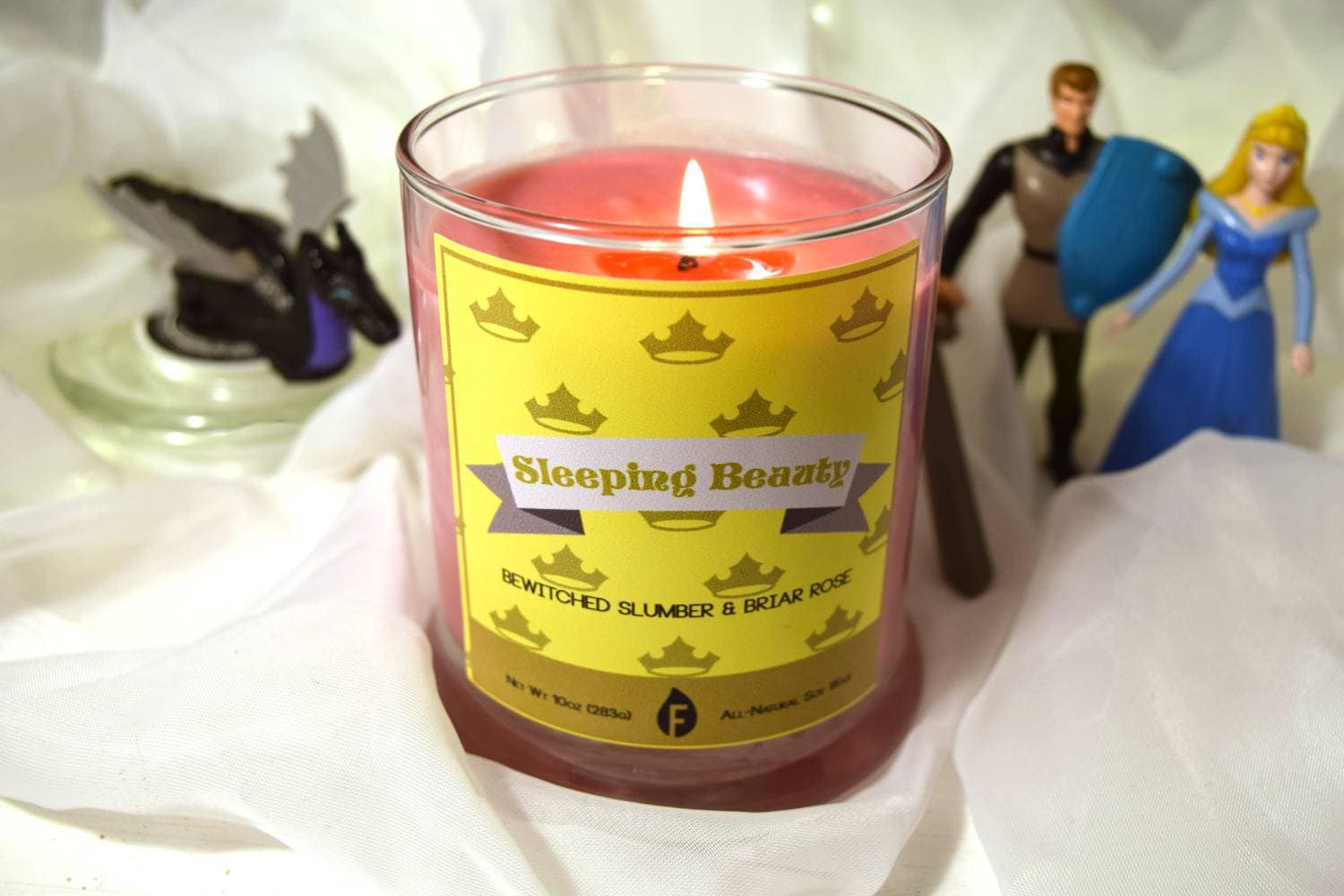 Poor Cinderella was treated as a servant by her own evil stepmother, forced to do the household chores and never allowed to enjoy herself. That is, until a kindly fairy godmother granted her a night at the Prince's ball, in a gorgeous blue gown.

Cinderella's fandle glitters like she did that night at the ball, and smells of the cinders which gave her her name, the cleanliness of her daily chores, and the magic she received on that enchanted night.

A young princess was cursed as a baby by an evil fairy, fated to prick her finger on a spinning wheel on her sixteenth birthday and die. The princess was named Briar Rose and kept hidden and protected from any situations that would cause her fate to unfold. Unfortunately the evil fairy found Briar Rose and lured her into the trap which would complete the curse set upon her. Instead of death, however, Briar Rose merely fell into a deep slumber thanks to the help of three benevolent fairies that had been watching over her since her birth. As with any happy fairy tale ending, her Prince awakens her with a kiss and she is able to return with him as a princess once again.

Our Sleeping Beauty's glittering fandle is the beautiful pink color of her dress, and smells of roses, like her name Briar Rose, and of chamomile and lavender, two calming scents befitting one who has had a very long slumber.

The beautiful yet "odd" Belle, as the neighbors in her small French town call her, has an incredible imagination and a big heart. She also has a great love of books, a love she shares with the terrifying but misunderstood Beast that has taken her captive. Her heart breaks the spell on the Beast before the last petal of the enchanted rose that keeps him captive falls.

Belle's glittery gold fandle is reminiscent of the golden ballgown she wears at the request of the Beast. It smells of the books she so dearly loves and teaches the Beast to love as well, French pastries as an homage to her home, and of course the enchanted rose.

The Beast has a royal blue candle with copper glitter that smells like the musty old castle he resides in with his bewitched staff, the dark and foreboding forest that Belle treks through to save her father only to end up held captive at the massive castle (and which the Beast fights for Belle to save her and her father), and to match his love- the enchanted rose that acts as both his curse and his savior.